Somewhat seasoned behind the mic, David Young of Post House Communications has years of daily broadcasting to his name. Having served his time at the award-winning stations, Radio Kerry and Cork’s 103FM, he now contributes to RTÉ Radio One, the Irish national broadcaster.

As a journalist with a track record of covering a heady blend of stories, David has proven his ability to engage with any subject on his own terms – be he anchor or studio guest.

Well, you have to concede, there are quite a few worlds to be found between waxing lyrical on the finer points of repatriating looted antiquity, while delving into the aesthetics of Greek artefacts… and exploring the idiosyncrasies of Charles Manson. But that’s just radio, and that’s just David.

His broadcasting professionalism has been recognised by the Phonographic Performance Ireland (PPI) National Radio Awards – nominating him for his contribution to current affairs in 2007. And his documentary work has been regarded internationally, with a shortlisting at the Celtic Media Awards, 2012.

David has gone on since to secure funding from the Broadcasting Authority of Ireland to produce documentary work. Most recently, he framed the life and times of Desmond O’Grady – the ‘great outsider’ of Irish poetry, and peer of Nobel-winner Seamus Heaney.

At the Post House, there is always something in the pipeline. So keep an ear out.

In the meantime, enjoy the eclectic archives.

David Young documents the eccentric doings of the rich and famous.

David Young speaks to the then Taoiseach (Prime Minister) Bertie Ahern, in the autumn of 2006, ahead of his meeting with British Prime Minister Tony Blair to negotiate devolution to Northern Ireland.

In a rare interview, Bertie Ahern gives his reading of the Irish economy, the building industry, the health system, and how wealth is distributed – all as a socialist would appreciate.

Presciently or not, this was just before things went bang.

Robert Fisk, Middle East correspondent for The Independent, has been based in Beirut for more than 30 years.

And so, as the holder of more British and International journalism awards than any other correspondent, Fisk is best placed to comment on his fellow professional’s predicament.

Once an Olympian, always an Olympian. Gold medallist from the Melbourne Games of 1956, Ronnie Delaney is a living legend.

Here, speaking to David Young, he tells of his life and times, and what it means to him to have taken the path he did.

A gentleman and an inspiration.

A singer-songwriter of critical acclaim, Majella Murphy secured a world’s first by releasing her album ‘Brave New World’ on a mobile phone by Sony Ericsson.

No stranger to playing the biggest festivals and appearing on TV, Majella joins David Young in studio…for a chat. A born performer, she describes herself as “spectacularly unemployable” – so thank the man above that music has proved her sanctuary.

This is the story of the life and times of Desmond O’Grady, in his own words. One of the senior figures in Irish literary circles, he is a man whose talents ought to be witnessed by a wider audience.

Poet, translator, and teacher, O’Grady is the quintessential wandering Celt – having led a robustly peripatetic life devoted to his crafts. And he continues to lead a remarkable existence, writing every day.

Here you get an opportunity to travel with him on some of those journeys.
Enjoy a rare listening treat from a master of words.

“What makes someone move to a rock in the ocean, in the middle of nowhere?” It’s a question Cape Clear islanders often ask themselves, while pondering the paths taken by those who’ve come to live with them. Without fail though, their doors are open to anyone who makes the journey.

And so, for the past 20 years, the southernmost inhabited part of Ireland has been home to American author and poet, Chuck Kruger and his wife Nell. This is Cape, as seen through the eyes of a blow-in who never wants to blow-out. The island wouldn’t let him, or Nell for that matter.


On A Cape Clear Day 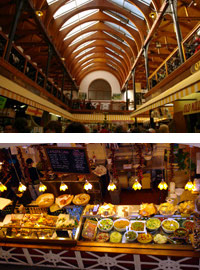 David Young ventures into the heart of Cork to explore the curiously-named and out-of-sight ‘English Market’, and finds a village that has survived more than two centuries.

Bringing you on a journey into Cork’s casbah, Young introduces you to traders and family histories that have shaped the city’s identity; and gives you an almost firsthand experience of a treasure trove of foodstuffs – fit for a visiting Queen.

Broadcast on RTÉ
Shortlisted at the Celtic Media Festival 2012

Culture on RTÉ Radio One